Of Ferrets and Men

Fun in the Sun 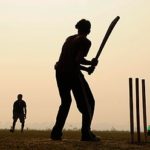 The hottest day of the year, finally the forecast is set fair for a cricket game, and, as I’m pulling off the A14, it starts to rain….. What a summer! Fortunately it is only a brief, if heavy, shower and by the time I get to Conington Hall the shower is history. The ground is surely one of the most unusual in our local area. The Hall looms over the pitch with its inviting windows, a couple of trees add local colour to the field, sheep spend 50 weeks of the year nurturing the grass and there are a myriad of local rules. Some make perfect sense (-6 (yes minus 6) if you clear the hedge in front of the Hall, £200 for a broken window, the trees are considered extra fielders and can be placed accordingly). Some make some sense (no LBW’s (Hawkeye is promised for the future), no extra balls for wides (I had trouble with this one)). Some seem completely random (retire when you get to 25 and the one I have forgotten). Anyway, after several conferences to explain these rules between the players, between the captains, and between the umpires (and combinations thereof), a couple of extra features were pointed out, namely a rather inviting barrel of Pegasus and a barbecue. The barbecue turned out to have an important role in that it determined the toss, which meant we batted first. At this point, Wiz began to earn his keep as captain. Rather than having too few players as anticipated earlier in the week, it turned out we had too many. So trades were arranged and substitutions negotiated. The match got under way with Conington’s Morkel sized opening bowler pacing out his run-up. I was glad I was not opening even as the first delivery looped high over batsman and keeper. Two balls later much the same happened but after the ball had reared up somewhat alarmingly having pitched half way down the track. The ball in between was worthy of Mr Morkel himself but proved too be too good for all on the pitch. This set the tenor of the game. Batsmen came and went as I struggled to understand the impact of the local rules, the ball disappeared frequently (but only once over the negative scoring hedge) and every so often the ball fizzed passed bat, wicket and outstretched glove. Nonetheless, it seemed that our gallant lads had mastered the local conditions as the score board rattled merrily on its way to over 200 in our allotted 30 overs.

Following a concerted debriefing of the Pegasus, the Blue Ball Grantchester took to the field as Conington’s Morkel look-a-like strode purposefully to the wicket. (Actually, I did not notice this as I was entranced by Nouveau pawing the ground at the end of his run up.) The first ball was impressive and our keeper stopped it. The second ball was shorter, the batter’s blade flashed, and the ball shot straight at Wiz, who I swear, did not move a muscle except his hands and took a blinding catch to his right. Nonetheless, Conington strove to keep up with the scoring rate admittedly aided by some declaration bowling from the end not protected by the negative scoring hedge. The drinks break beckoned and the team trooped off with a concerned look although it was not clear if this was due to the score or the state of the Pegasus barrel. At this point Wiz came to the fore with a deft re-arrangement of the team which allowed me to keep closer tabs on the aforesaid mentioned barrel. Suddenly some of the somewhat idiosyncratic field placings made perfect sense as spectacular catches went to hand, a direct hit caused a run-out and Dave Foster, extracting turn and bounce (or maybe that was the Pegasus) sent 4 on their way in 3 overs and we ended up winning comfortably by 100ish runs. At this point, the barbecue (of determining the toss fame) sprung into to action and we were treated to some excellent burgers. I don’t have the scorebook in front of me to note other highlights but I seem to recall that (almost certainly for the only time in my life) I outscored AP by cunningly restricting him to one ball (which went for plus 6) in our last over. So to provide the one sentence summary, the Grantchester machine rolled on because we had a) a better percentage of the Morkel ball, b) a better (younger?) keeper, c) an astute captain who d) placed those of the team who could move and catch just to the left (or right) of where the ball was hit so some spectacular catches could be taken.

Many thanks to our hosts at Conington and Conington Hall for a memorable afternoon of cricket.