The first casualty at the TwentyTwenty GCC Quiz was the red wine which disappeared faster than a Boris baby bounce, shortly followed by one of the bottled beers I had never heard of before. Fortunately the magic card machine was working and folks were kind enough to sample the Milton Brewery barrel while the red was replenished. Still there was a definite tension in the air as the start approached, Would the white wine stocks hold? (Yes); Rose? (Just); Would the Caterers remember the vegetarian option? (Of course!). All this and more hung over the Hall like stench of gunpowder over the field Agincourt. 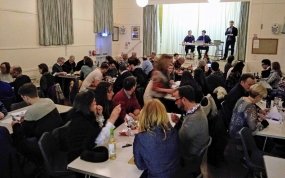 It was eye’s down at 7:35pm as Quizmeister Jamie brought us to order lured us into a false sense of confidence with a few softballs on Sports of which we got the occasional one correct. However the beer and lack of red wine were kicking in and the food round was particularly satisfying. Post food, Jamie bombarded us with a seemingly incomprehensible selection of questions involving famous quotations from famous films via Jamie’s son Wilf. Sadly Wilf missed out on, “Frankly my dear, I don’t give a d%^&” and “Here’s looking at you kid” so that was zero/10 for me and frankly, my dear, my team mates didn’t do much better. 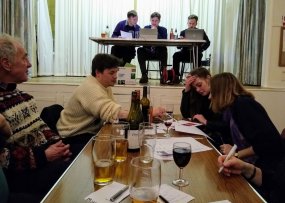 My glass (foreground) is definitely not half full

The music section was, to be fair to Jamie, much more focused on My Generation than in the past but without actually providing anything our team could recognise sufficiently accurately to persuade the markers that our quest for the wooden spoon was futile. Head Scratchers followed including the number of daily (clock) hand crossing. I’m still convinced its an odd number although not the really odd number I persuaded our team was the answer. Nonetheless, we had lifted ourselves from last spot when we played our Trump card (aka Joker) on a round where we got none (well one if the markers were feeling charitable) correct. A masterstroke and we sailed back past the usurpers to reclaim the much coveted GCC Quiz last place. We ended up with about 50% of the winners, Sarah’s team EMI, score so sincere congratulations to them. Here they are celebrating! 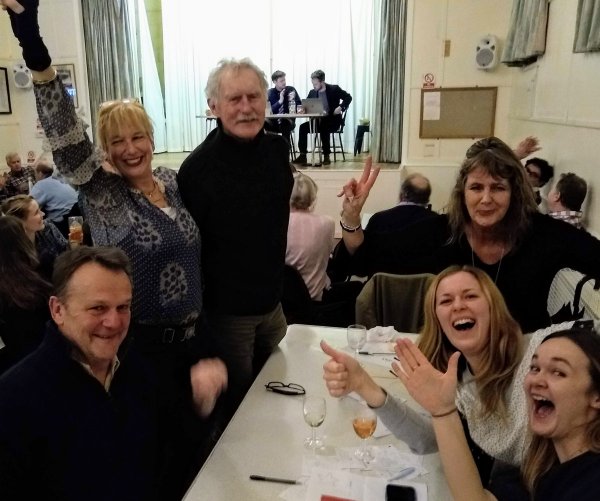 Last, an accidental video which my phone decided to take for no particular reason and seemed to sum up the sense of futility I felt trying to answer some of Jamie’s fiendish questions. Thanks to everyone involved notably Wiz, Chris, Sam, Dan, Sandy, Camice and of course Jamie for a great evening..