GCC vs Menzies XI and the Weather Gods 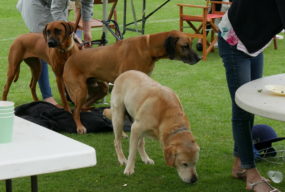 One plate of cakes less…

Not sure who won this but the Gents sure looked handily placed when ‘dinner’ called. The Players’ innings was notable for Ferg being out twice, presumably following on, Dan Farman and the skipper accumulating notable scores and Jake scoring 28 of his 30 in boundaries (the out field was quite slow because of the rain which explains the two singles). All in all it added up to 177 for vice skipper Jamie’s Gentlemen to claim a quite proper victory. 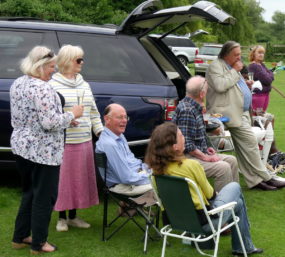 The President showing some form

After a pair of brief cameos from JA and the other Professor (GK) in the face of some serious Player bowling (my request for Prof on Prof action in the middle fell on deaf ears), Don Syme and Jamie set about restoring the natural order of things. AP shifted his tactics frequently and often, eventually playing for Don and Jamie’s retirements @50 at which he was completely successful. Stopping for a spot of drinks at 95 for 2, the Gents looked well placed in spite of Jonty introducing his new ‘flatter’ delivery to match his cap. But then AP pulled out his trump cards (see last two pictures). A YJB behind the stumps may well have resulted in a Dad dismissed by Son moment but it was not to be….(to be continued, maybe)