A Yank At The Court Of King Arthur…

…or A Day At The Association Of Cricket Officials Conference 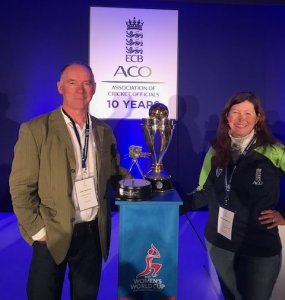 Grantchester C C had two representatives at the umpire and scorers conference at Lord’s on Saturday, 28th., October. Camice has been keen to qualify as an umpire after trying it this summer, keen enough to have already passed the online course. We’re both halfway through the classroom course – me for the second time. On the way we learnt of the umpires’ conference and simply couldn’t resist. The day was fun but hardly what we expected. We caught the end of the AGM in time for a county representative to quote the then England and Wales Cricket Board funding of his county of some twenty years ago. He then read from this year’s accounts. It was the same figure. That’s true of almost every sport. Cricket, rugby, football and more have become so much more about watching the very best rather than playing at the very ordinary level. The audience was predominantly club level umpires who’d been told how valued they were for years while the accounts told a very different story. Strangely, The ACO’s audited accounts had not been circulated in advance but were handed out on the day. Why might that have been?

The day’s first session was a ‘preaching to the converted’ hour on ‘enjoying umpiring’ though the arrival of ‘the spirit of cricket’ into the laws book in 2000 suggested where the game was going. The recent arrival of the very lengthy Law 42 – the sanctions for misbehaviour – has only served to confirm it. Happily, Grantchester C C has its own values.

We couldn’t book the Hawkeye session. It was, of course, the first to fill but it’s an obvious way of grading umpires. It’s also unforgiving. With LBW or the ‘thin edge’ you’re either right or wrong. Might you really want to be found out? We didn’t get the chance. 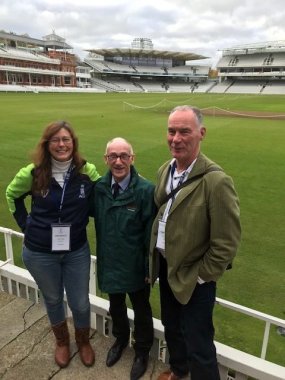 We then toured Lord’s with a very well informed guide. I’d never appreciated the length of the walk from the dressing room to the crease, down the stairs, through The Long Room, down even more stairs and out. That walk must be unnerving for the debutant. I took five wickets for Selkirk on my debut a couple of seasons ago that was chalked on a clubhouse board for all of a night.

A rather good buffet lunch was followed by an hour of the very entertaining Geoff Miller. The predominantly Derbyshire all rounder and some thirty cap international, was full of tales of 70’s and 80’s cricket told in a thick though penetrable accent. My favourite was his having bowled Viv Richards somewhere ‘oop north’ early one day and walking to the boundary expecting a hearty cheer but meeting only silence until one of the crowd stood and shouted, “Miller, you’ve gone and ruined my bloody day! I’ve paid thirty bloody quid to watch him!”

The afternoon session was entitled ‘Women in Cricket’. There were shiny videos about the women playing cricket that smacked of Sky TV type advertising for Kia, the sponsors of women’s top flight game. Two current England internationals appeared on stage only to be spoon fed questions about the Women’s World Cup, playing for England and more, that limited them to cliched ‘amazing, fabulous, dream come true’ replies. Both were, doubtless, capable of answering more in depth questions but were simply denied the chance. This was almost unfair. At a conference supposedly about umpiring, scoring and otherwise officiating at club level, the one time they were asked if they’d consider umpiring post playing, both appeared almost surprised by the question. When pressed, both volunteered Anya Shrubsole as a potential future umpire, based almost solely on her on pitch behaviour. This aside, not once was the role of women in the game, umpiring, scoring, whatever, mentioned. Are there any women umpiring? How many? What level? Bizarrely, proud mention was made of two women umpires who had reached international standard. One an Australian, the other a New Zealander. The ACO simply didn’t, it appeared, get the irony. This last session badly misfired. It was almost condescending in its manner. The ACO was, doubtless, well meaning but it was an opportunity badly missed.

Interestingly, I’ve been to many similar events at Twickenham. There have always been a few international referees or players handing out awards or otherwise supporting the day. At Lord’s they were nowhere to be seen…