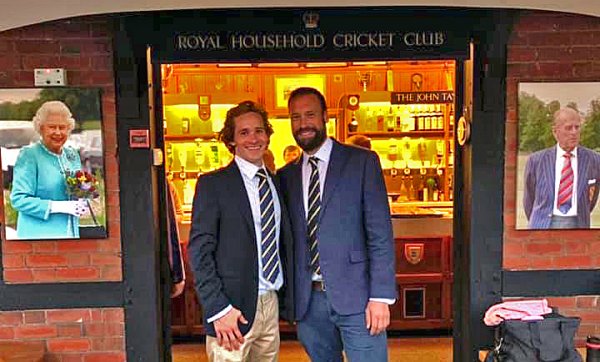 Be it known throughout the land that on the last day of August in this year of Our Lord, we are pleased to have had William Wray Esq. represent The Gentlemen of England against Our Sovereign Majesty’s XI at our home ground of Windsor Castle. His attendees were Francis Wray Esq., Mrs. Angela Wray, Ms. Camice Revier of Her Majesty’s colonies in The Americas, and Mr. Anthony Kennedy that he may assure Her Majesty that the game is played within the game’s laws as established at Hambledon and since protected by The Marylebone Cricket Club. 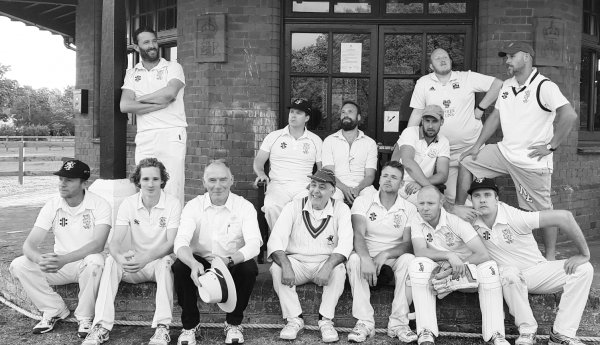 Enough toadying. GCC’s Will Wray was asked to play for The Gentlemen of England at Windsor against The Royal Household CC. The game was obviously very short of an umpire and Will asked if I might. That had Will, Angela, Fran, Camice and me arrive at the gate to our names on a list and a sub-machine gun carrying attendant making sure we were who we said we were. An old fashioned, timed game had the visitors in trouble before Geoff, an early sixties, behind the scenes MCC employee, sat front and centre on the step, with a clever, brave forty and Will, a totally undeserved number nine with a twenty, scored half the team’s 130 all out. Geoff, at all of 5’2″ in his small pads, forearm guard and full face crash hat looked like, he’ll forgive me, a Playmobil cricketer, especially as he ran past 6’2″ of Will. He left the field to applause from the hosts and the rest of the innings to Will who went to one of those inside edges that tours the pads before rolling into the stumps.

The hosts, with the one ball used for both innings, were never really in trouble before reaching the total for four. The game was old school, played in an excellent spirit, backed up by a rather good tea but let down by a pitch of two totally different ends as the red kites overhead were drowned by the every forty seconds passing of a 747.

I umpired alongside Deborah Burns, an umpiring legend, and one of the most efficient I’ve ever accompanied. Her local knowledge had her separate half a dozen players from their cup cakes to cover the pitch before the shower. It saved an hour’s wait at least. She was all detailed notes, times and efficiency. An absolute role model.

The day’s hero, though, was Geoff. A forty, a couple of very good stops in the slips and the lbw I gave him were scant reward. He was all ear to ear grin as off-key chants of ‘Geoff’s our hero !’ filled the changing room. Geoff, Fran, Will and I were among the last to leave the bar. Some things don’t change.

Republican? Me? Not any more, TK