Camden Casuals on a not so glorious 12th (of August)

I last spoke to Maurice just 5 weeks ago when the Highgate Taverners were playing Grantchester, an annual fixture he helped to initiate and which he was disappointed to miss this year. Despite being in the care of his Macmillan nurses, he was his usual cheery self, pleased to hear of the match which was an annual renewed connection between the two main centres of his life- London and Cambridgeshire, the reason being cricket, a major enduring facet of that life. Maurice had been very much a North Londoner and at the risk of sounding patronising, on behalf of all of us I pay tribute to those friends he made in the latter part of his life in these parts and gave him friendship and purpose, helped in his ill-health and have helped to bring us here today. Friendship was everything to Maurice but he never expected it nor asked a lot of it. Yet he quietly inspired it and we will all miss it hugely although I am in no doubt, that in death as in life, he will be the focal point of stories. Because each of us will have stories involving this haphazard timekeeper, friend, colleague and team member, lovable and utterly unselfish, except with ball in hand!

The young Hyde was brought up in Friern Barnet, knowing war-time London, its bombing and its rationing. After the war he attended Finchley Catholic Grammar School. His younger brother Tony recalls him having many friends with cricket being the binding thread. After a clerical job in the City, he did National service in the RAF and, it seems, wore whites more often than the light blue. After the RAF which he extended for a year, probably to get another season in, he became an area rep for Calor Gas

Maurice , after moving out of London, somewhat unexpectedly became a butcher and he took to butchering meat during the week at Morrisons as much as he had enjoyed carving up opening batsmen at the weekend. Prior to that, for most of his working life in London, he was an ad man, becoming advertising director of the Scottish Field. The magazine was owned by a wine company and he had a reputation for entertaining media men with fine wine and port in the boardroom. But lest we think that corporate carousing was his professional forte, I have been told that he provided very detailed statistical analysis to back up his pitches for advertisers to use the pages of a somewhat niche magazine and he earned and sustained considerable client loyalty. And who could doubt that, because to do business with Maurice Hyde would have been a pleasure, and a sometime intriguing one at that.

Maurice became a good friend of my family in the 1970’s and 80’s and was often at family parties in Highgate village. I recall that my parents and my children alike were disappointed if he wasn’t present; such was his way with people of all ages. Whoever they were, he could make them laugh.

And so it could often be with Maurice as a cricketer. He was no mean performer and no bits and pieces cricketer in the modern parlance, a fast medium bowler through and through who expected and demanded the new ball, whoever he played for. As a young man he had appeared for Middlesex Seconds, The RAF frequently and once for a Combined Services Eleven. He also appeared for any number of touring sides at top club level and opened the bowling for a private touring side at Newlands in Capetown and the Wanderers in Johannesburg. That was a measure of his ability but most of us knew him when he had stepped down a notch or two and he brought his skill and determination to village cricket after some 30 years playing for Finchley Cricket Club, for many of those years a sort of second home to Maurice. Hard statistics were impossible to trace but he took hundreds of wickets for the first and second elevens and when I first went there for nets in the 70s Maurice Hyde’s name was already legendary.

On one famous occasion Maurice bowled out Ealing in an away match for just over a hundred. Well pleased with his efforts, and due to bat at number 11, often his slot, although he was no rabbit, he decided to retire to the launderette, confident that Finchley would knock off the runs. Maurice returned to find much consternation and an angry and voluble skipper. The 9th wicket had fallen a handful of runs short, Maurice was absent without leave and Finchley lost due to his laundry expedition. It is believed he was banned for the rest of the season, although such was his popularity, and ability, that the ban was swiftly rescinded. The launderette story survived, was probably embellished and did the rounds of cricket dressing rooms for years.

A couple of seasons later, after a home game, Maurice celebrated a victory in the bar in some style, falling off a bar stool and hitting his head on another. He was told to go to hospital but he declined , said he would be alright and would sleep on the other side to the wound. He turned over during the night and presented himself at Barnet A and E the following morning. Cue the nurse: Name, address Date of Birth etc. followed by “What’s the problem?” which received the following reply.” I don’t know if you have, profanities excluded noticed but I appear to have a pillow stuck to my head”

With such a reputation already founded did he play with some of us for many years, for teams assembled by individuals for specific fixtures, for the Stoics and for the aptly named Walkers Cricket Circus whose founder is here today along with a few others?

Maurice, Moriarty, Mo, he responded to all these names, was a talent, a delight, infuriatingly unpunctual and a cricketing and social partner of renown. We can picture him now, wheeling at the top of his run, locks greying but flowing , looking for all the world like Arthur Scargill, yes he was also called “ Skargy”, ending his delivery Trueman like, half way down glaring at batsmen. Woe betide you if you didn’t accurately return the ball to his hand for the next delivery for he would refuse to stretch to catch it and let it bounce to the ground.

On a weekend tour to the Isle of Wight, skippered by my brother, the team assembled at the Hovercraft Port, rotors were revving for departure, Maurice nowhere to be seen. He was found with seconds to go underneath his battered Renault 5 attempting to mend the exhaust. Someone lent him an AA card for a low loader repatriation. On another tour he shared a children’s room with a black Labrador and its owner, Maurice being found in the cot in the morning, the dog having slept next to its master.

Stories abound, perhaps more later. Maurice Hyde was a one-off, without an enemy in the world, except perhaps traffic policemen. When he was breathalysed in London he asked the officer why he had been stopped.” I thought you were driving erratically “came the reply. “ Thank goodness for that” said Maurice- “ I thought there was something wrong with the steering”

He could make fun of himself and he constantly made fun for those around him, sometimes by just being Maurice. Colleagues warmed to his capacity for generating laughter. He in turn appreciated his friends and was grateful to them. He always spoke extremely warmly of others and especially his long time companion Ursula from Sussex.

He found contentment here in East Anglia and very much valued his friends from Fenstanton, Grantchester Cricket Club who gave him the honour of Life Presidency of which he was inordinately proud, Conington, the late Colin Williams and his wife Gerlinda the White Swan, Helen, who along with Chris Hollisey has been managing the closure of Maurice’s affairs after helping him through his illness which eventually claimed him.

To many he was the man in the corner of the pub, sometimes seen with an MCC tie and a panama hat, wry smile and, I understand, enjoying what became known fairly universally in these parts, as a sliver of ale. I believe it is somewhere between a half and a pint according to the landlord’s generosity.

Farewell to an eccentric English gent of a very special sort. Two lines from a grace used at two anniversaries of Walkers Cricket Circus, the first being its 25 year celebration at Lord’s , give hope to us all when we follow him to the Pearly Gates:

St Peter we’re sure would never deride
Those who played with Maurice Hyde. 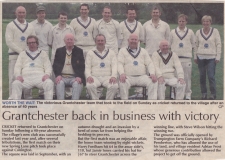 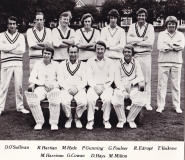