Camden Casuals on a not so glorious 12th (of August)

Arriving on the stroke of Tea (great timing!), I found Camden had reached 167 in their 35 overs. Considering last week 199 had literally been a par score and a lot of rain had fallen in between time making the outfield much slower, it seemed good, to me at least. Sam L and GCC’s two W’s (WW) opened for GCC and Sam seemed to miss last week’s outfield against a useful pair of opening bowlers. But the scoreboard was soon moving briskly and not in the wickets column. 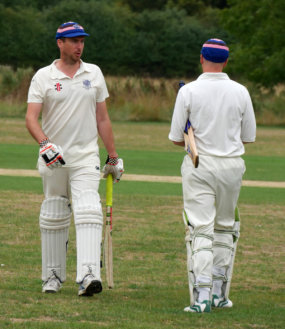 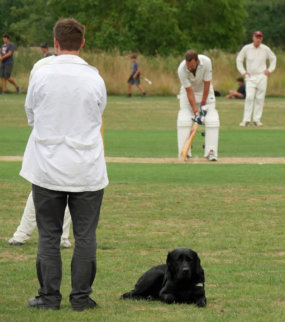 …and later helped out with some umpiring

Jamie joined WW after brief Nick B/Ferg W cameos and soon decided the outfield was not to his liking, taking the aerial route more or less from the get go. His innings ended with two massive maximums followed by a skier so high that I think I might have managed to reach it (if not actually catch it) running (surely you exaggerate, Ed) from the boundary. Fortunately Camden did not need such assistance as their wicket keeper moved the far shorter distance and used his gloves to good effect. 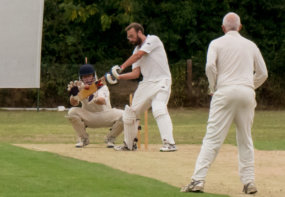 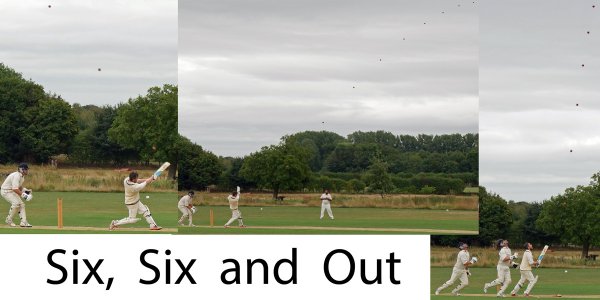 As GCC’s batters came and went, periodic bursts of frankly quite brutal hitting from WW kept GCC ahead of the run rate before a couple of shrewd bowling changes brought scoring to a standstill. After a few overs WW had clearly had enough and blasted most of the remaining runs off three balls before attempting to clear the Grantchester Village boundary with the fourth. Unfortunately he missed the ball and I missed the (camera) shot. This brought TK to the wicket and, after a couple of deliveries attempting a reprise his charging leg glance, Vibhu had seen enough and stroked the winning boundary. 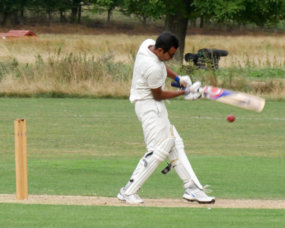 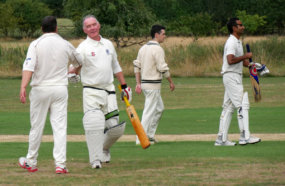 LINK to Google Photos gallery with much more!