GCC has had success against all our opponents over the years…. except one. The Menzies XI who have regularly recruited a side where the victory has varied between comprehensive and comfortable over Grantchester’s finest. Would this year be the time for the Menzies monkey to be prised from its perch upon the collective GCC back?
If you can’t be bothered to read the rest of this rather splendid lunch inspired drivel, you can cut to the chase by see the photos HERE (link opens a google photos album). Otherwise read on….
GCC amassed a 160 odd total from their 30 overs built around a couple of major contributions from Kamal and Ferg who while I don’t have the score book, appear to have scored approaching 80% of GCC total between them… but as I said I don’t have the score book. The Menzies XI guest players were in full flow when I was released from my Real Tennis duties at Grange Road. And very impressive guest players they were too. In fact the elegance of the batting, the beauty of a the ground (Spring Lane was looking truly superb) and the clemency of the weather (that’s enough flowery phrases, Ed) made it abundantly clear I was not watching the England team playing at Lord’s (which I had been the previous week… what a shambles) (that’s enough brackets, Ed). But as in most things, if you wait long enough, the wind changes. A brilliant catch by keeper Phil…

Phil snaffles one off Michael’s bowling

…and another strike and GCC were into the soft underbelly on the Menzies XI. The only problem was that the soft underbelly comprised of GCC’s own Jamie Menzies who belied his claim that he ‘couldn’t buy a run’ this season by blasting the ball hither but mostly thither in the direction of the river. Amidst the hither and thither, there was of course some characteristic elegance. Well Jamie’s credit certainly seemed good for a match winning innings when he attempted to deposit a straight ball from Jake into the Marquee. Fortunately for you dear reader, but unfortunatley for Jamie, I happened to be taking a photo at the time… 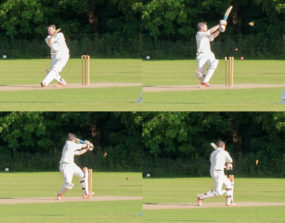 A few more meaty blows not withstanding, GCC eased to win by the now standard margin for the 2018 season of a few runs to the gentle sounds of a monkey dislodging itself from a back…
Congrats to our bowlers some of whom are highlighted below but but be sure to click HERE to see the full Google Photos gallery.

clicking on the images above will display a larger version